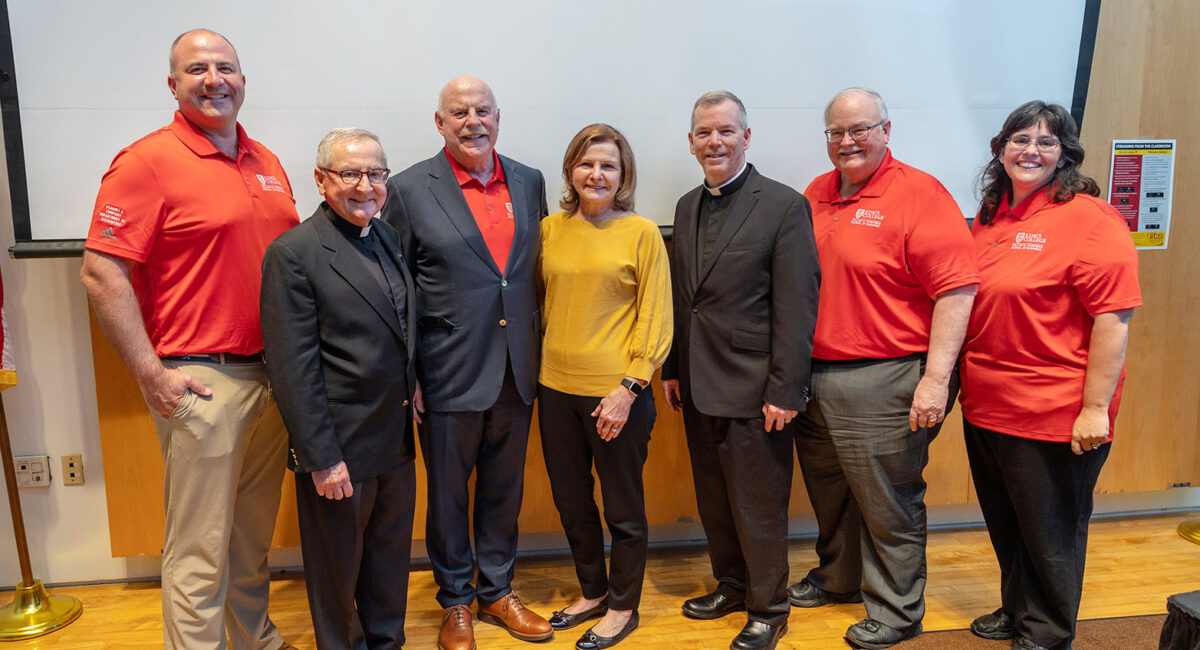 Wilkes-Barre, PA — On Tuesday, May 11, the College welcomed King’s alumnus Edward Kearney ’74 and his family to campus for a special presentation held in the Burke Auditorium located in the William G. McGowan School of Business, following all recommended CDC guidelines for indoor gatherings. In September 2020, King’s announced that in recognition of a $1,000,000 commitment from Mr. Kearney, his wife, Anne, and his business, Kearney & Company, it was naming the College’s well-respected Accounting Department as the Kearney & Company Department of Accounting. Due to the pandemic, the College was unable to publicly celebrate and recognize the Kearney gift in person at that time.

The event celebrating this extraordinary gift, which supports King’s and its students in the William G. McGowan School of Business in several impactful ways, was attended by Ed and Anne Kearney and their son, Brian; King’s College President, Rev. John Ryan, C.S.C, Ph.D.; incoming president Rev. Thomas Looney; employees of Kearney & Company; members of King’s senior administration; students, faculty, and staff from the McGowan School of Business, and recipients of the Kearney & Company Scholarship. In addition to remarks offered by Kearney, Fr. Ryan, and members of the faculty, Barry Williams, Dean of the William G. McGowan School of Business, announced the newest recipients of the Kearney Scholarship for the coming year: Hannah Marvin ’22 (a rising senior receiving a full tuition scholarship) and Kyle Mlodzienski ’23 (a rising junior receiving a full tuition scholarship as well as a summer internship with Kearney & Company in summer 2022).

A native of Dallas, Pa., Ed Kearney is the president and CEO of Kearney & Company, an Alexandria, Virginia-based certified public accounting firm that focuses exclusively on the federal government, providing an array of services across the financial-management spectrum. Mr. Kearney offered remarks during the presentation that highlighted his journey from his beginnings at King’s to his successful leadership and expansion of his firm. “I’m not sure I should have been here. I was a much better carpenter than I was an accountant, and certainly a much better carpenter than I was a student. But nonetheless, everybody here was patient enough with me to help along my way and help me grow. That’s what gave rise to me wanting to do something to pay back the school for what it’s done for us,” he said.

Longtime partners, Kearney & Company annually recruits King’s students for internships and jobs following graduation. In addition to his service on the King’s board of directors since 2017, Kearney also gives back to his alma mater through his involvement with current students. He truly understands that the networking experiences students have with alumni can be invaluable as they pursue careers in the financial industry.

“We have hired about 60 King’s grads over the years. King’s graduates represent a great body of students to recruit from,” Kearney remarked. “King’s is an easy school to recruit at, and the faculty and administration are truly committed to seeing the graduates get a good job after they leave.”

Fr. Ryan commented on the distinction of naming the Department of Accounting for Kearney & Company during his remarks at the presentation, saying, “King’s has a strong tradition of exceptional accounting graduates. We have an outstanding reputation that spans decades, and this gift helps us to keep that going, to keep that reputation. King’s is known in a special way for accounting, and to have the Kearney name attached to the accounting department is such an honor for me, knowing the Kearney family,” he said.

King’s is an easy school to recruit at, and the faculty and administration are truly committed to seeing the graduates get a good job after they leave.

How did King’s College change your life? How did you give back to help others and serve the common good? Who helped you along the way? Tell us your King’s College story.